In this article, we’ll answer this frequently asked question and several other common questions. Let’s begin with a definition to ensure that everyone understands how shea butter is derived.

What Is Shea Butter and How Is It Used?

The shea nut is the seed that comes from the fruit produced by the shea tree.

Shea butter is most commonly used in cosmetic products, especially in skincare formulations as a moisturizer or body lotion.

In recent years, as the natural hair community continues to grow in the United States, using shea butter for natural hair care is also pretty common.

According to the National Research Council, shea butter is also edible. Some communities in Africa use it to prepare their food, much like we use butter or cooking oil in the United States.

Shea butter has even been used as a substitute for cocoa butter while manufacturing chocolate in the European Union.

Shea butter can be dated back to ancient Egypt and Africa. It was a trading commodity many years ago, that was carried on clay jars in the trade caravans.

During this time, it was used primarily for beauty and cosmetic purposes like it is today. Even then it was a precious and valuable commodity.

Roughly 1,000 years ago, the Ancient Egyptians and Africans used the butter to protect their skin from the sun and from the hot temperatures of their native climate.

As you know, today shea butter is widely used in the cosmetics industry mainly for hair and skin related products.

In the video below, Whitney (aka Naptural85) describes several techniques for keeping dry hair moisturized during the year. Within the video, Whitney uses shea as a sealant for her natural hair.

Note: Several of these purported uses are derived from historical use cases and community research. In many cases, these claims haven’t been verified with credible scientific evidence. To the extent that science supports these claims, the information will be included as this article is periodically reviewed and updated.

Using Shea Butter vs Cocoa Butter for Your Hair and Skin

This is an interesting question because shea butter and cocoa butter are very similar. Although, if you have sensitive skin or deal with acne, I would recommend using shea butter over cocoa butter.

Some African countries especially those in West Africa use it for more traditional purposes, for example:

Several companies use a classification or grading system for shea butter quality. The most commonly used classification system has been separated into five categories (A, B, C, D & E):

Among all these categories, only extractions receiving a grade of A, B, or C are the ones primarily used for commercial purposes.

Grade A ranges from a creamy, ivory color to a grayish-yellow color, while Grade C is generally white. Grade A also has a nutty aroma that is not present in all the other grades.

Where Can You Buy Shea Butter?

Shea butter is widely used as a sealant for natural hair. It is therefore frequently found in beauty supply stores that cater to black hair. It can also be purchased from online retailers. 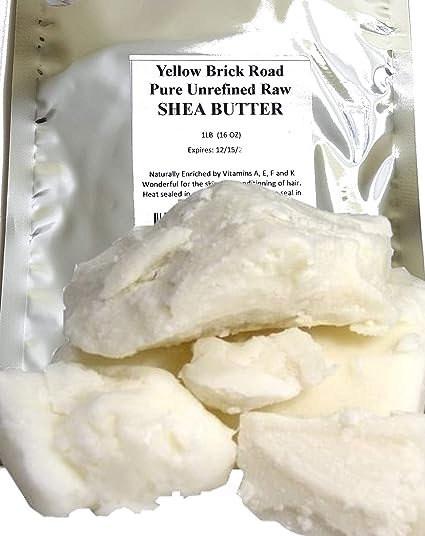 Yellow Brick Road 100% Raw Unrefined Shea Butter Check Price Read Reviews
Curl Centric may receive compensation if you make a purchase using this link, at no additional cost to you.

Pure, unrefined Shea butter is non-comedogenic, although it is high in oleic acid. It is beneficial for dry skin but might prove too much for acne-prone skin due to its high level of oleic acid.

If you're not using grade A butter, it's important to understand the product may contain other ingredients. The difference in the formulation of what the butter is mixed with matters quite a bit.

Study your skin carefully for any reactions to the product, since everyone’s skin is different. It's always better to be safe and patch test on your skin with the butter before you apply the butter all over your scalp.