The oil is usually either very pale yellow or colorless. It does not have any taste or odor. Despite this fact, it is possible to have castor oil that is darker in color, but this is due to the extraction method.

Although the castor plant was originally found in India and East Africa, it is now grown all around the world in various tropical zones.

Castor oil has been used for a variety of purposes throughout history because of its components which include three fatty acids: oleic, linoleic, and ricinoleic acids. The last of these is a common ingredient in hair moisturizers.

As mentioned, castor oil is produced from the seeds of the castor plant. To extract the oil, a cold-pressing technique is most commonly used.

First, the person will remove the outer hull of ripe seeds as this part contains ricin which can cause side effects due to its toxicity.

After removing the hull, the seeds are cooked to make them more pliable. They are then dried and put into a cold press which is a device that applies a high amount of pressure to extract the oil.

Finally, the oil is filtered, removing impurities and making it slightly yellow in color.

History of the Castor Plant: The Name “Palma Christe”

Early in the history of castor oil, the plant it comes from was known as “Palma Christe” due to the thought that it could heal wounds and cure ailments.

Later on the oil was used for medicinal purposes in Rome, Greece, Africa, Persia, China and Ancient Egypt. It spread to America and Europe during the 17th century and now can be found worldwide.

Although there are several benefits to using castor oil, many of them can directly improve the hair.

One of the most reported benefits is that castor oil can decrease hair loss because of the ricinoleic acid found within it.

Many claim that ricinoleic acid will not only protect the hair but also increase hair growth through circulation on the scalp.

The prevailing thought is that by increasing circulation, the oil can help improve hair growth in addition to fighting hair loss.

Castor oil is not a featured ingredient in hair loss shampoos or other products designed to treat male or female pattern baldness. Also, the other fatty acids in the oil, which are similar to those in coconut oil and olive oil, are not associated with hair growth.

Candidly, I haven’t been able to substantiate the claim that castor oil promotes hair growth. Many women massage their scalp with the oil and notice improved hair thickness.

Massaging the scalp, even with water, can stimulate the hair follicles according to scientific studies conducted on lab rats. So, it’s possible that castor oil is being credited inaccurately.

How to Use Jamaican Black Castor Oil

The best way to use the oil to benefit your hair is by applying it directly to the scalp and hair. In the video below, Yolanda Renee, a popular YouTube vlogger, discusses the techniques that she uses with Tropic Isle Living JBCO.

Some people believe that Jamaican Black Castor Oil is naturally black in color. This is actually inaccurate. The fact is that the dark color is the result of ash being added to the oil from roasted beans, as explained by Sunny Isle JBCO.

The organic seeds are roasted, then ground manually by a grinder. The resulting ground beans are then boiled further to produce pure organic oil that appears to be dark brown in color.

Sunny Isle states their Jamaican Black Castor Oil is darker than most because they roast their beans far longer than the competition, producing the ash content characteristic of the Sunny Isle brand.

This explains the presence of ash in the oil, which doesn’t really mean that the product itself is inferior to other oils in the market. It just shows how the company produces their black castor oil as compared to other manufacturers. The ash itself has yet to be found beneficial, but it answers the question in everyone’s mind, “Why is JBCO black?”.

Where to Buy Castor Oil for Hair? 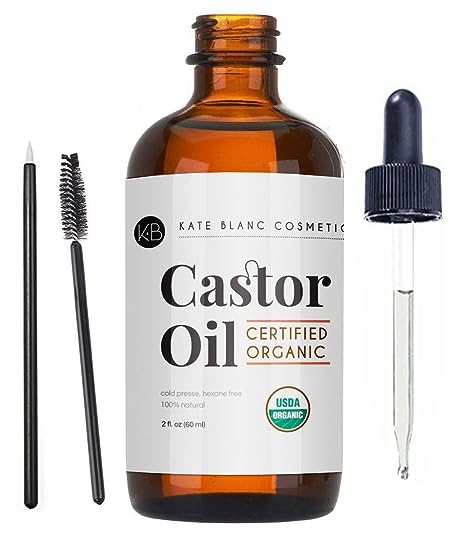 The oil is available at most major retailers, although we tend to recommend Amazon.com due to good customer service, competitive prices, and international shipping.