The frohawk is one of the most popular natural hairstyles and a personal favorite of mine. Although, if you’re new to the natural hair movement, you may not be familiar with the style. Is a frohawk analogous to a mohawk? Let’s discuss.

What Is a Frohawk?

A frohawk is a curly updo or afro styled to look similar to a mohawk with a centralized section of hair that runs from the forehead down to the nape.

A mohawk is a central, narrow strip of upright hair that runs from the forehead down to the nape, with the sides of the head generally bald or shaved close to the head. Hence, the frohawk and mohawk hairstyles are very similar.

The term mohawk is also applied much more loosely to similar hairstyles, many of which have informal names, including the deathhawk, liberty spikes, frohawk, psychobilly mohawk and chelsea hawk.

The History of the Frohawk Hairstyle

The frohawk, named by combining the names of the afro and mohawk hairstyles, is often worn by African-American men and women with naturally curly hair.

The hairstyle can be worn with many variations. Some people will have hair twists on the side, pinned up sides, cornrows or shaved sides similar to a mohawk.

The frohawk hairstyle is thought to be the traditional haircut for warriors out of the African Mandinka tribe.

Actor Mr. T also popularized the hairstyle in the 1980s. It then had another resurgence once R&B singer Usher wore a frohawk on the cover of his album titled ‘Looking 4 Myself’.

The Ponyhawk Tutorial: Frohawk with a Ponytail

Traditionally, frohawk and mohawk hairstyles have been considered unprofessional. Although, we believe that these hairstyles can be worn casually and professionally. The options are nearly limitless, but here are a few cool hairstyles that should get your creative juices flowing.

This style of frohawk is masculine and perfect for men who have tight curls. The sides are cut especially short and allowed to fade towards the back. The raised middle section is usually about an inch long.

Shaved sides with a big curly frohawk. The central section of the hair shows on the model’s beautiful curls. Meanwhile, the hair on the sides has been fade-shaven with a semi-precise line around the sides.

The raised frohawk in the middle is perfect for showing off your style. On the side, the remaining hair looks best when shaven with a fade, taking extra care to even up the sideburns. This style looks great on African American men in particular.

Blonde hair works wonderfully in a mohawk. The main difference is that it’s a bit longer up top. If you go with this, you’re going to want to keep some hairspray on hand.

5. Side Braided Mohawk on Straight Hair

This hairstyle is for only the boldest and most confident ladies. If you have straight hair, it can easily be braided tightly, with ponytail in the back for extra style. This style works best for medium length hair, although longer hair can work too.

The History of the Mohawk Hairstyle

The mohawk is commonly called a mohican. It’s a hairstyle where both sides of the head are generally shaved, which leaves a strip of hair in the center.

Besides being referred to as a mohican, iro is another named for the mohawk. The term iro comes from the Iroquois Tribe, which also wore the popular hairstyle.

Originally mohawk styles were created by plucking the hair out of the head, which sounds painfully. Although it’s common today to use hair clippers to recreate the style.

The hairstyle gets its name from the Mohawk Nation, an indigenous group from the Mohawk Valley area in New York. Even so, the association is from a popular movie from 1939 starring Henry Fonda titled Drums Along the Mohawk.

The Mohawk Nation and other members of the Iroquois Confederacy (i.e.,  Tuscarora, Onondaga, Seneca, Cayuga, and Oneida) were known for wearing a square patch of hair on the back of their heads.

The Mohawk Nation pulled this hair out in small tufts instead of shaving the head like we would do in today’s world.

This hairstyle has been around in many areas of the world for years. For example, the Clonycavan Man, which is a 2000-year-old male that was found around Dublin in 2003, was found wearing a Mohawk that was styled with a pine resin and plant oil mixture.

There was also artwork found along the Pazyryk Burials that dates back to 600 BC that depicting Scythian warriors wearing similar mohawks.

There was also a body of a warrior that occupied one of the Kurgans that had been scalped much earlier in life who wore a hair prosthesis that was in the form of a mohawk.

Herodotus, an ancient historian, also claimed that the northern Libyan tribe would shave the sides of their hair, letting the middle grow long. 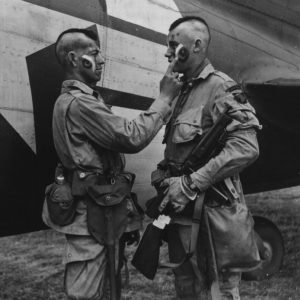 In World War II, some American soliders, thought to be paratroopers, wore mohawks to intimidate their enemies. American troops throughout the Vietnam War also wore the hairstyle.

Depending on how the mohawk is worn, it can be a very high maintenance style. It calls for careful, regular shaving or trimming to keep the clean lines in between the shaven and unshaven areas of the hair.

If you are going to be wearing the hair up, it may require blow drying, brushing, backcombing and twisting, along with the application of sprays and other holding agents.

Popular holding agents include gelatin, clear or white glue, egg whites and cornstarch. The time required for styling can increase by a great deal when there is longer hair or a complicated style like liberty spikes, also known as the liberty hawk.